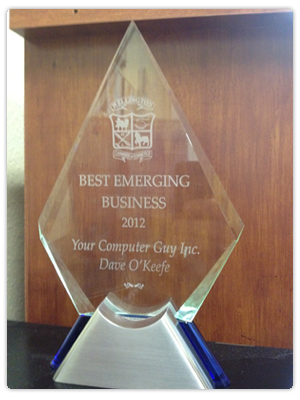 When entering the headquarters of YCG, there was no doubt that I had entered an IT zone. There were all sorts of computers, cables, adapters, converters, switches, an “operating table” (a.k.a. a large workspace for dissecting computers), and IT related certificates on the walls and tables. And then there was Dave O’Keefe, Owner and President of YCG who is being honored with “The Best Emerging Business Award.” 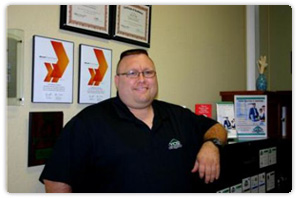 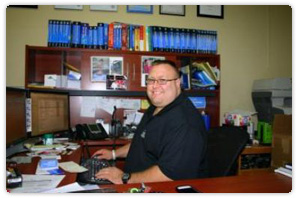 Dave was born in Niagara Falls, N.Y. His previous career interest before IT started at age 4 years when he began playing ice hockey as a defenseman. Up through high school he played in the U.S. and in Canada.

Dave attended Niagara County Community College and studied Criminal Justice; he then joined the U.S. Army. In 1997 he moved to Royal Palm Beach, FL. He worked various jobs at that time which led him to SkateZone in Lake Worth; he worked as the Pro Shop Manager and Assistant Hockey Director. He also began working with Airtime Technologies in Lake Worth which required him to learn IT. He began as a tech on credit card machines but really started gaining an interest in the IT industry when he was promoted to run the “Help Desk.”

Dave began night school for IT training and was promoted to Network Administrator at Airtime. He was responsible for the Lake Worth and Houston offices assisting the CTO with both data centers. He earned his A+ Certified Professional Entry Level IT Certificate in 2004 and completed Microsoft Certification training in 2005 from Comptec Career Institute. In 2011 Dave completed Apple training at Go4Cast Training and earned Apple Support Professional.

YCG was born in 2004. In 2006 they moved from a home office to an office in Palm Beach Gardens. In 2009 they moved into their current location at the Lake Worth Professional Centre.

YCG became a member of the Wellington Chamber of Commerce in 2009. In 2011, Dave, Dean Piper of W4CY and Greg Weiss of Blue Whale Apps, started a technology committee within the Chamber. He is currently on the Small Business Committee as well. Dave also volunteers his time and services to Lake Wellington Professional Centre, Western Academy, and he sponsors soccer teams.

Dave credits his business’s success to several things. He believes in providing the best service possible regarding price, time, cost, and personal service. Regarding technology, he believes in incorporating the latest tools into his business. He was one of the first companies to offer remote service calls to his clients. Basically he accessed other people’s computers from his location and made corrections while the client watched from their computer. This obviously cuts down on time and costs. Now, many large companies are utilizing this tool.

Dave stated, “In IT, you have to be a friendly and personable – it’s all about the people interaction -you can’t just be all work and technical. We also show our clients what we are doing as we are doing it so they can learn.” Dave also does little extras like sending birthday cards to his clients.

Get in contact with one of our technology professionals.